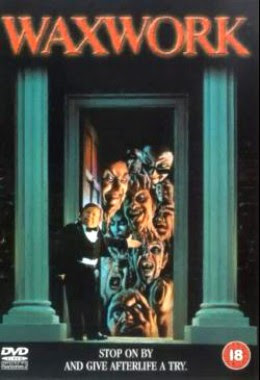 This is the type of movie for horror fans who are secretly big kids at heart.  Sure, this film has naughty words, a little violence and is definitely for a mature audience, but it's also the type of movie that has you grinning like a big kid all the way through.  It's the kind of film that grins along with you.  I used to write stories like this as a child and I think that's partly why I love this as much.  It's a ''tree house movie'' in the sense that it just makes you want to go and adventure through a fun nightmare.

Waxwork is about a group of teenagers who get a little more than they bargained for when they visit a wax museum one night.  The mannequins all come to life and transport them into their own little nightmare.  We have all sorts of cool things going on here - vampires, mummies, werewolves and even swashbuckling.  It's classic monsters presented in a classic way, albeit very cheesy and funny. This movie isn't trying to innovate, it isn't trying to make you think in anyway - it's all about  having some fun and I dare say even the whole family could enjoy this, despite the odd naughty part.

There's a creepy little atmosphere present throughout.  I mean, a wax museum at night would be pretty scary I imagine.  The museum owner and his little friend are such obvious villains as well.  You almost find it unforgivable the heroes didn't run off at first contact with them.  The movie hits a climax with a battle more epic than Return of the King, minus elves, trees and Viggo Mortensen's.  This isn't a film for gorehounds, but there is some tongue in cheek blood.  Don't expect Braindead in that department, but expect equal amounts of fun.

Fun, 80's gem that every fan of horror comedy needs to own.
Posted by Fistfull of Boomstick at 18:16