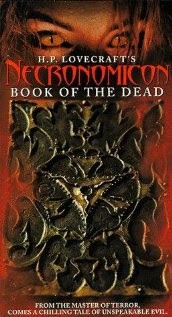 Necronomicon  is an anthology featuring segments from Brian Yuzna, Christophe Gans and Shusuke Kaneko.  Each segment is a segment from the 'Book of the Dead' and the stories are read through the eyes of one H.P. Lovecraft, played by the legendary human being Jeffrey Combs, who is using the book to steal some ideas for himself.  Sly devil.

The first segment, directed by Gans, is called 'The Drowned' and if you ask me it's the best segment.  This story focuses on a man who resurrects his dead family with help from the book, only to take his own life, but not before leaving his confessions in a suicide note.  The man who finds the note then finds the book and has to deal with his own terrible past.  This is my favourite story of the entire anthology.  I love the stormy, seaside setting, the haunting building on the rocks and the best moment of the entire movie occurs here when we see a water beast deliver the evil book to the first victim of the movie.  It reminded me of a much darker Muppet Treasure Island when Billy Connelly received the Black Spot.  This was the funnest segment from an anthology where every segment was more or less perfect in my opinion.

The second tale is entitled 'The Cold' and it focuses on a woman confessing a stroy to a reporter about a string of murders from 20 years before.  The story involves a slightly mad scientist striving for immortality, an obsessed tenant and a young naive flute player who's runaway from home to start a new life in the big city, away from her abusive stepfather.  This is another great tale and it has some pretty demented moments.  The melting scene was another highlight of this movie.

The third segment is directed by a hero of mine - Brian Yuzna and is called 'Whispers.'  The story follows a policewoman, pregnant with child, into an abandoned building on the trail of a criminal known as 'The Butcher.'  There she meets two very strange characters who help her on her pursuit and inform her the villain is actually an alien.  This has a Brian Yuzna feel all over it and is definitely the darkest and most disgusting.  It also has that classic 'don't trust anyone' feel along with some neat body horror, both qualities Yuzna has mastered in his movies over the years.

This is one of my all time favorite horror movies and I can't recommend it enough.  It's a very unique movie and deserves more recognition.  It's dark, bizarre, unhinged, demented, funny and disgusting.  I think Lovecraft himself would be proud of this adaptation of his work.
Posted by Fistfull of Boomstick at 19:25