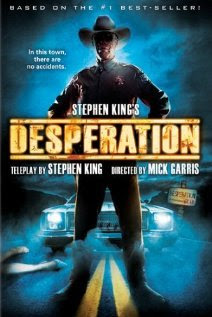 I'm only just baby steps into my Stephen King quest, in which I plan to watch everything put to screen that he's ever written, and already I'm questioning this decision.  So far I've enjoyed everything but if there's going to be a lot like Desperation then I'm in for the horror equivalent of a Machine Head concert - enjoyable for so long but then I just want to go home and watch something else.

Desperation stars Ron Perlman as Collie Etragian, a sheriff who picks up travelers on hsi highway and takes them to jail in the isolated town of the title of the movie tells us.  He's a bad cop and there's something not quite right about him and evil is afoot.

This wasn't a bad movie by any means.  In fact, it started off with a lot of promise and was captivating for awhile.  The scenery was beautiful and worth watching alone, but it did enough to engage me for an hour.  However, just when I was expecting the payoff I started feeling letdown.  This was just a case of a film that shows potential and then falls a little flat.  It began to feel like it was dragging on and became somewhat of a chore to watch.  I had high hopes but came away feeling unfulfilled (now I know how every girl I've ever had relations with must feel... sorry ladies).  I'd say recommend this if it was on TV, or maybe even give it a rental or pick it up cheap.  There's enough here to enjoy, but there's even more to leave you feeling underwhelmed.


Posted by Fistfull of Boomstick at 12:53