Before I review this, I'm just going to have a typing orgasm about it for a lil bit and throw some trivia on y'all.  Pieces is an awesome exploitation movie and I love it for many reasons.  This was Christopher George's (of The Exterminator fames) second last movie.  If you ask me he went out on a high (although I've yet to see his last ever movie).    The director also gave us classics such as Slugs - The Movie and Supersonic Man, but this was by far his 'masterpiece.'  To add to the sleaziness, one of the writers was the guy who wrote Emanuelle (she meant the world to me when I was 13).  Pieces never stood a chance of being tasteful.  It's also so beautifully random, and has a memorable moment with Bruce Lee's best imitator, Bruce Le who provides the most pointless yet glorious kung fu for the viewers delight.  Also, this is Eli Roth's favorite movie of all time and he's been spreading it around the Hollywood A list and brought a new fan on board in Brad Pitt.  I like to think Brad will bestow this movie upon his children one day.  Pieces is my 'sickbed movie.'  I watch it every time I'm not feeling good and this weekend I just happen to have flu, so obviously I was returning to this little twisted love of my life. 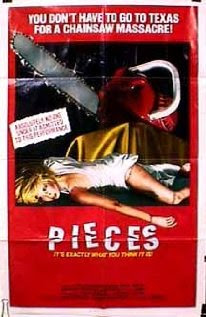 One day a little boy is caught by his mother building his naked lady jigsaw, so like any responsible parent of a young child would do, she got mad and took it away.  The kid didn't respond well though and instead of begging for forgiveness he chopped her up with an axe.  Fast forward in time and a college campus has fallen pray to a killer and they're all part of the grand jigsaw.

Pieces is trashy, sleazy and nasty.  But it's lots of fun.  This is where I differ from the general consensus though, because it's often placed in the 'so bad it's good' category.  Sure, it is, but I think it's one of the most original slashers.  When you see this, it stands out.  It's one of my all time favorite movies because I can watch it so much.  This will please the gorehounds, those who want to laugh and those who just love slashers.  This is one of the best slashers of the 80's, and the 80's owns all decades when it comes to slashers.  The killer is fantastic and the new jigsaw is a necrophiliacs dream.  This movie is held in the same regards as Citizen Kane, The Godfather and Baby's Day Out.  You'd be foolish not to watch it.

Seriously though, watch Pieces.  It's the most fun you'll have have.  Grab some beers, get a pizza and if you're on a date and she/he likes it, marry them on the spot, because that my friend is a keeper.
Posted by Fistfull of Boomstick at 22:35