If there's a Godfather of exploitation movies then surely it's Roger Corman.  The ultimate Hollywood rebel and quite possibly the cheapest man who's ever lived, this is a fascinating and utterly compelling documentary featuring interviews with some of the most prolific filmmakers and actors to grace cinema, as well as the great man himself. 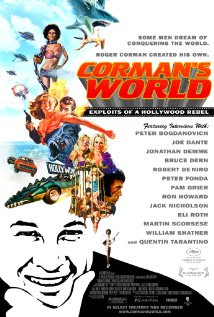 The world of cinema will always have a special place in its heart for Roger Corman, and if this documentary shows us anything it's how fondly thought of he is by his peers, without any sugar coating his flaws.  Stories of how cheap he is are laugh out loud funny, yet very insightful.  This is a celebration of Corman's life, work and who he is as a person.  What is truly amazing is that true legends of cinema like Jack Nicholson, Robert De Niro and Martin Scorcese take time to pay tribute to a man who was very influential on their own careers.  I mean, if there's 3 people you can aptly call a legend, it's those guys.

Corman is in many ways a genius.  For instance, his ability to see the change in the times and move with them back in his day was amazing.  He probably won't ever get the credit he truly deserves for his social commentary either, dealing with issues such as teenage rebellion and racism in America.  He certainly knew how to piss people off even though he was merely trying to make people aware of injustices.  He truly does deserve the tag of 'rebel'.

This is a must see documentary.  Even if you're not a fan of his work... or seen it for that matter, Corman has a fascinating legacy and if you ask me, he deserves all the plaudits thrown at him.  He's unparalleled in the history of cinema in terms of his influence.  There's only one Roger Corman and after all of these years he has the drive and passion of a man a quarter of his age.  Bravo.
Posted by Fistfull of Boomstick at 22:39