This is one movie I was dying to see ever since watching the trailer.  The hype for this one has been massive.  So did it live up?

YOU BETTER BELIEVE IT DID!!! 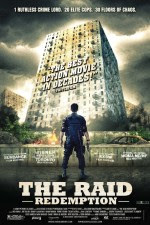 The Raid is without doubt one of the best action movies I've seen in a long time.  In terms of action it's probably one of the best ever.  The fight scenes for a start are simply awe inspiring and brutal, each bullet and melee attack is effective and and the physicality of the movie never lets you down.  It's fast, brutal, edge of your seat, gung ho awesomeness.

The premise is simple - a SWAT team go on a seek and destroy mission into a tower block to take down a mobster and his goons.  So there's not much in terms of story and character development, etc. However, with a movie like this you want action and that's where it delivers.

The action here is out of this world and adopts the martial art style of Pencan Silak, along with guns, axes, swords and knives.  This is a must see for any action fan and is surely going to go down as a classic on par with John Woo's Hard Boiled and other movies like this.  Gareth Evans has planned a trilogy and the sequel sounds even more awesome, with car chases planned to be thrown into the mix. Hollywood have already planned their remake of The Raid which I'm actually looking forward to as the same choreographers are being brought in.  Hopefully it's a huge success and opens the floodgates to extreme action movies on the big screen in future.
Posted by Fistfull of Boomstick at 12:38