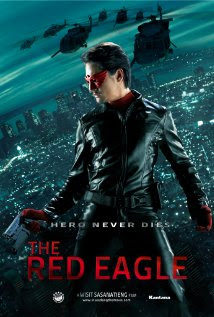 The future is rarely ever an appealing place to live in the world of cinema, is it?  Humanity is going to fester away and become corrupt.  At least that's what the movies tell us, but hey, all stories gotta come from somewhere, right?  Yes, in the future politicians will become more devious and the only hope for mankind is going to be vigilante superheroes.  The Red Eagle is another movie that provides us with a negative outlook of future society.  This feature from Thai director Wisit Sasanatieng, based on a TV series from the 1960's is a vigilante/superhero movie about a futuristic Bangkok in the year 2016, where politicians are corrupt and criminals pollute the streets.  The people need a hero and that is what they get in the form of 'Red Eagle.'

An unfair comparison I'll start off with is The Dark Knight.  Now, by no means is this the Dark Knight, but a lot of it is set out the same way with the combination of long dialogue pieces that are quite politically themed and action sequences.  However, they are still totally different movies and where Dark Knight is superior with story and depth, Red Eagle wins with more exciting action sequences.  This depends on personal taste however, as the action here is over the top and comic book style, with some gore thrown in.  I dig that more.  As I watched this I thought of Kill Bill a couple times.  Bare in mind though this is totally different than the movies I just compared it too.  It shares aspects, but this is very different.

There are a few flaws here.  For instance, it's a very long movie that went through a spell near the end where it felt dragging, but an action packed finale made up for that.  Another flaw... well for me there wasn't.  It delivered exactly what I wanted from it - amazing action sequences at the right points and on top of that it was an interesting story exploring the corruption in a futuristic Bangkok, with seedy politicians and violent criminals, all under the control of a mysterious Illuminati-like group known as 'Matulee,'  who wore expensive suits and creepy masks.  However, Red Eagle is cutting his way through their goons to reach them and they do all they can to stop him.  This leads to them calling in 'Black Devil,' a creepy, hooded masked assassin, equipped by sword and AK-47.  And thank GOD they called him in because it leads to a 20 minute action sequence that takes place on buildings, billboards and finishes on an elevator.  It was truly spectacular, as was every action scene in this film. 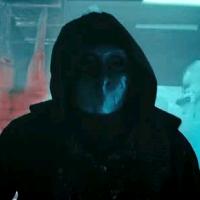 Overall, I recommend this one to those of you who enjoy action.  It was fun, over the top and had enough story to give it depth.  Maybe it could have been shorter, but who cares?  It delivered enough awesome moments to please me and I'll watch it again.
Posted by Fistfull of Boomstick at 19:02