I grew up in the wrong era.  I wish more than anything that I grew up as a kid in the 80's.  The 80's is just the best period ever for everything.  I mean, for a start you had John Hughes movies.  In my opinion, John Hughes is the ultimate.  Then you have the countless amazing horror movies.  It was also the best period for kids films.  The type of kid films that you love even in adulthood.  The Last Starfighter is one of these childhood classics that never gets old. 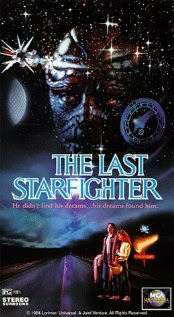 The film is about a guy called Alex, who lives in a trailer park and dreams of a better life.  His main form of escapism comes in a video game, which he just happens to be exceptional at.  Alex meets Centauri, an alien who recruits him to defend the galaxy from a real life alien invasion and the rest is one of the best adventures any teenage boy could ever dream of.

The Last Starfighter has amazing special effects.  Sure, some people may think they're cheesy but I love them.  However, it's packed with heart, fun and adventure that makes your inner child gleeful and joyous.  The score is fantastic, the performances are amazing and the movie just has a great feel throughout.  No matter how many times I watch it I can't help but get engrossed.  It takes you on a fun adventure, it's feel good and extremely charming.  A gem of the 80's that still looks great today... if you like your effects with a little bit of cheese anyway.

A sequel has been written and there's also talk of a remake.  A sequel would be amazing.


Posted by Fistfull of Boomstick at 00:12