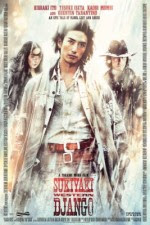 Sukiyaki Western Django is Takeshi Miike's homage to Spaghetti Westerns.  It employs the classic themes of a Western, it has all the fun things you want in a Western and it's unique because the cast is almost entirely Japanese.  The movie has a cameo from Quentin Tarantino, which is fitting because it's a very Tarantino-esque movie.  By that I mean it wears its influences on its sleeve proudly and has fun while it does it.  It's the type of movie a director would make for himself but genre fans will appreciate.  A nod to Sergio Leonne but done with the pzazz of Takeshi, Sukiyaki Western Django is a beautiful movie, done with style.

The story is a classic Spaghetti Western - a mysterious gunslinger rolls into a town which has been ravaged under the control of two warring gangs looking for a hidden treasure.  We've seen it before but we haven't seen it like this.  Sukiyaka uses all the Western themes and concepts, but splices them with Samurai influences and a little bit of steampunk to create an action packed, dramatic, humorous and ultra-stylish treat.

The movie does a great job of balancing character development and action, the visuals are fantastic and the soundtrack is out of this world.  An interesting movie that pays tribute to classic Spaghetti Westerns while adding a whole new spin to them.
Posted by Fistfull of Boomstick at 14:45