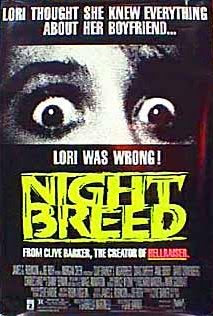 Nightbreed is about a hidden society of monsters who live in the underground world of Midian, hiding from human society.  However, the evil Dr. Decker (played excellently by David Cronenberg) is out to destroy them and he's bringing the law with him.  This is a modern take on classic monster movies, where the villagers would go with torches and pitchforks to kill the monster.  Here, the pitchforks have been replaced with more modern and deadlier weaponry.

This is a truly fascinating movie with so much depth.  It's more than a monster movie, it's also a love story.  There's also an apparent commentary which suggests the evils of the human race and the monsters, as a vile as they are, are put in place to highlight how bad humans are.  This movie has a moral that society is too quick to judge those who are different, something Barker himself has had to deal with personally at times.

The special effects, the monsters and the score are all very impressive.  The acting isn't the strongest point of the movie, but everyone is passable, with the exception of Cronenberg who shines.  However, the acting is dramatic and in a movie like this, it's exactly right for it.

Nightbreed is a gem of a movie that all horror fans should see.
Posted by Fistfull of Boomstick at 17:01