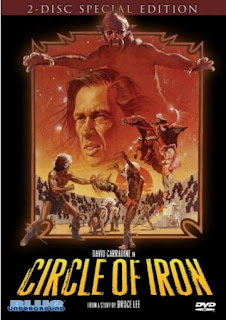 The Silent Flute (also known as Circle of Iron) is an action/adventure/fantasy based on an idea of the legendary Bruce Lee before his untimely death.  The story follows Cord The Seeker, who is on a mission to find a mystical book known as 'The Book of All Knowledge' which is being held by a wizard know as Zetan (played by Christopher Lee).  On his journey for the book, he has to overcome a number of challenges.  Along the way he encounters unique characters, including a man bathing in oil and more importantly, his sort-of guide who is a blind flute player played by another late great, David Carradine.

This movie isn't a martial arts-fest from an action point of view.  Instead it explores the mythology of Zen.  There is enough action to keep the viewer occupied though if that's what you're looking for (not the best choreography though), but the concepts on display here are what really makes the movie interesting.  It's actually the concepts and mythology involved that keep the movie interesting throughout, as the acting isn't perfect and neither is the direction, but at the soul of it there's something special.

The movie is engaging as it offers Eastern philosophies to a Western audience.  I find this culture fascinating so this is where I get my main fill out of the movie.  However, if you just fancy a movie with a bare chested fighter with just the right amount of cheese then you'll enjoy it.  It has plenty of humor.

The remake is supposedly due out some time this year.  It'll be interesting how they approach it.  I suspect it'll be all action and lack of philosophy.  I'm usually all for giving a remake a chance, but I just feel this shouldn't have one.
Posted by Fistfull of Boomstick at 22:40