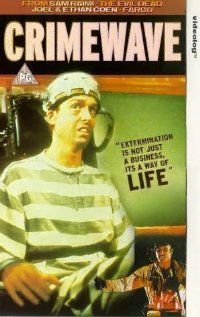 Honestly, what can you say about a film like Crimewave?  Well, for a start it's written by the Coen Brothers and Sam Raimi, as well as directed by Raimi.  It stars the legends Bruce Campbell and Brion James in key roles.  As to be expected, it's goofball, slapstick, dark comedy with elements of crime movies of the 40's and 50's, it's very inspired by film noir, big band musicals of the 30's and 40's and comic books.  Like much of Raimi's work, the humor is screwball and reminiscent of the Three Stooges, with some instantly quotable one liners.  In addition to all of the darkly comical, wacky and surreal moments, the heart of the film has a story of 2 people falling in love (in the classic rogue gets the lady kinda way).  So, one thing you can say about Crimewave is that there's no other movie like it.  At least none that I know of, but in many ways you can compare it to Hudsucker Proxy (the other Coen/Raimi collaboration).

The film starts with Vic Ajax being escorted to the electric chair for a murder he didn't commit, and along the way he's bumbling the true story to the guards in the hopes that they will let him go.  What unfolds for the next 90 minutes is the true story.  The story is intriguing, bizarre and hilarious with lots of classics moments that will have you rolling about with laughter.

Crimewave certainly isn't for everyone, but those of you I know for sure read my blog would really enjoy it. Or maybe you have seen it and didn't.  It's one that slipped under the radar in the glittered careers of Raimi and The Coens (they even dismissed it because it wasn't the way they wanted it).  It still is a remarkable movie though, that pays off in its ambition.  It also homages previous Raimi classic, The Evil Dead.  Just keep an eye on the newspapers and you'll know what I'm talking about.  Basically though, it references the portal that sucked Ash away in Evil Dead 2, which Raimi was writing at the time.

Please check out Crimewave.  It really is a lost gem.
Posted by Fistfull of Boomstick at 09:55

Email ThisBlogThis!Share to TwitterShare to FacebookShare to Pinterest
Labels: Cult