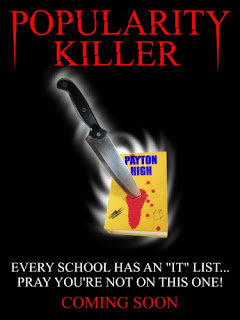 Following on from their excellent and deservedly acclaimed previous short Teddy, Slasher Studios have now brought us another excellent short, Popularity Killer.  And excellent it is, especially if you love a good slasher.  Like their previous effort Teddy, there's a throwback feel to it, but also like Teddy,  it's more than a mere throwback and is great in its own right.

Popularity Killer is great in many ways, but there's a core element that many everyday people can relate to - high school.  High schools are like jungles, and we've all seen the people who only care about being popular.  Then there's always the odd person who dreams of killing them all.  Fortunately for me, I was an 'inbetweener' but I witnessed this daily at high school, so for me this makes Popularity Killer all the more hilarious.  It's got great dark comedic elements to compliment that compliment the horror well.  It's an awesome satire of high school, as well as a fun-filled slasher.  And may I add that the villain looks awesome and may even creep out those of you who are the opposite of me (ie, not rooting for the bad guy).

It's an awesome homage to slasher films of the 80's and 90's.  Watching it, I felt a Wes Craven vibe.  There's also a nice homage to Romero.  It wears it's influences while bringing it's own identity due to how intelligent, witty and fun it is.  The best way to describe Popularity Killer is fun.  I've showed it to a couple of my friends and they felt the same way.  I genuinely believe that Kevin Sommerfield is a supremely gifted writer and Steve Goltz is a great and very promising director.  They deserve a chance to do a full feature.  Let's hope this propels them into the limelight they truly deserve.  It's great to see horror made by obvious horror fans.  They know what the audience wants to see and they deliver.  So, watch POPULARITY KILLER, watch their other short, TEDDY: IT'S GONNA BE A BEAR, spread the word and show some support.  These guys really are talented and I look forward to their future projects.  So, without further ado - Popularity Killer.  Enjoy.