Return of the Living Dead: Necropolis 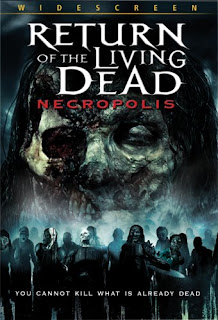 I've done it.  I've completed my mission of watching the ROTLD in a matter of days, and because I still have flu, I might just watch another series.  If I do I'll review it here.  On to the point now though, what did I think of ROTLD: Necropolis?

After watching Rave to the Grave, I was expecting Necropolis to be the same trashy, mindless, fun crap.  But I was wrong.  This movie surprised me and proved all of my preconceptions wrong.  I thought it was a genuinely great movie that deserves a place in the series.  It may not be better than the 1st 3, but it does enough to deserve merit alongside them.  The only criticism I have is the slow moving zombies, but the strengths of the movie as a whole make that criticism irrelevant.

The film is about a group of friends who break into the headquarters of a corporation who are creating zombie super soldiers to save their friend.  It loosely follows the ideas put forward in Yuzna's predecessor.  But all Hell breaks loose when the zombies break out of their prison and start wreaking havoc on the place.  That's the basic summary of the plot, but as basic as the plot is, there's a lot of filler in this one to keep us fixated.

Unlike Rave to the Grave, the gore in this is pretty good and there's some neat special effects.  Also, like the 3rd one, it focuses more on horror than comedy.  I also loved the idea of Bio-Zombies.  Maybe this movie was trying to capitalise on the success of Resident Evil.  It doesn't matter though as Necropolis is good in its own right.  The acting was solid but not spectacular and more importantly, there was a robo zombie with a machine gun arm.

I honestly don't understand the criticism for this one.  I can understand for Rave to the Grave but not for Necropolis, as it was a genuinely good small budget movie with a lot going for it that kept me entertained throughout.  This doesn't rank with the 1st 3, but as I said, it does do enough to deserve a place in the series.
Posted by Fistfull of Boomstick at 07:28

Email ThisBlogThis!Share to TwitterShare to FacebookShare to Pinterest
Labels: horror