A little over a year ago I was in my most visited DVD shop when I came across a movie called Return of the Living Dead Part 2 for a mere £2.  The cover art was amazing and for that price I just had to buy it.  I took it home and watched it that night and loved every second of it.  I then done some research and found out that Return of the Living Dead was a cult classic of the 80's and compared to the first part, the second was supposedly sub par.  So I picked up the first, watched it and fell in love with that one as well.  I don't think the second part is sub par either, as I love them both.  They're ridiculously entertaining, funny and the zombies are a fresh concept to this day, let alone 1985 when the first movie was released.  So far I've only watched the first 2, but this week I intend to complete the series and review it right here.  My coursework can wait as horror is more of a priority than University.

Return of the Living Dead: Part 1 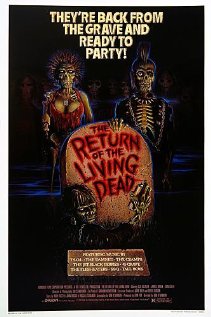 First off, I need to comment on that cover art.  You just don't get cover art like that anymore.  Sometimes it's a cool cover that lets me know instantly that I'm going to love a movie.  I hate that I didn't grow up in the 80's.  Definitely my favorite era for movies.

Return of the Living Dead is a hilarious comedy horror, with a terrific blend of both, albeit cheesy.  This movie pays homage to the Godfather of Zombie cinema George Romero, but it's a stand alone great in its own right and a cult classic which is held in as high regard as Romero's classics by many horror fans, including me.  Actually, I like it way more than Romero's Dead series (I like my zombies more trashy and goofy personally, but I do appreciate some Romero).  Return of the Living Dead has everything I love from a horror comedy zombie movie; graveyards and the dead rising from their graves, amazing FX, cheesy witty dialogue, punks, naked girls dancing in graveyards, storms and all round chaos overall.  On top of that the score is great and it really is visually stunning.  Some of the outdoor settings give it a great vibe in particular.  And who could forget the incredible tag line, ''They're back from the grave and ready to party.''  It really does some it up, and what a wild party it is.

Zombies can get pretty boring from time to time.  There's countless zombie movies out there.  What makes Return of the Living Dead stick out for me is it's very different from a lot of zombie movies.  First off, killing them isn't as easy as the traditional destroy the brain.  Nope, each zombie here gives you a time of it here.  Killing them actually has more in common with Deadites than zombies.  There's a lot of dismemberment here but even then they aren't truly dead, or even truly immobile either.  The way is to burn them, but how is it possible to burn an entire army of the undead?  Our heroes really have their work cut out here.  Second, the zombies here are fast, intelligent and still have traits of their humanity, with additional cannibalistic tendencies.  My favorite scene is when they interrogate one of the reanimated dead and she explains why they love brains.  For some reason, that scene blows me away.  Furthermore, the characters are endearing and react with logic to the situation they're in.  If you can't kill a zombie with a blow to the head, then cut it off, if it still comes at you, hack its limbs, if the limbs keep coming, incinerate them.  Sure, it's hilarious to watch, but it's very applicable and sensible to their situation.

I could go on and on and on as to why you should watch this movie, but I'd only spoil so much of its surprises and delights.  Those who have seen it will probably back me up when I say watch it asap!!!

Return of the Living Dead: Part 2 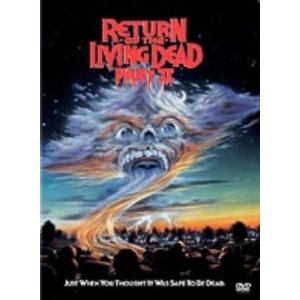 Once again, this one has some amazing cover art...

So, this one splits opinion among fans.  Personally, I love it.  Whether that's because I seen it before the first one I don't know.  But I've seen them both many times now and I still love them both.  The second part is different to the first part in many aspects, but it still has so many of the characteristics that made the first one so great.

This movie spices it up this time with kids finding barrels of the toxin which brought the dead back to life in the first one, and their childhood curiosity gets the best of them and they unleash it back into the world by accident.  This movie has a child as the main hero, which I love because it gives it that Goonies/Monster Squad idea of what Jason Eisener (Hobo With A Shotgun director) has described as a ''treehouse movie.'' I get where he's coming from.  Kids adventure where it's up to them to save the day.  Some of those movies remain a favorite of mine to this day.  We still have teenagers and adults here, but our hero is the kid.

The sequel is a fun zombie romp and I don't understand the criticism of it.  It offers some fresh ideas such as electricity instead of fire for a start.  I mean, no one really wants to see the exact same thing done again do they?  Like the first though, it's still funny and we have some returning faces.  The zombies look disgusting as well which is always a bonus.  It's cheesy, it's fun and it's everything anyone could want from a sequel to a widely regarded movie.  I still rate it as one of the best zombie flicks ever to grace the history of cinema, as I do the first.

I've yet to see the remaining installments of this series, but I plan to watch and review them within the next couple of weeks.
Posted by Fistfull of Boomstick at 08:20

Email ThisBlogThis!Share to TwitterShare to FacebookShare to Pinterest
Labels: Return of the Living Dead, zombies