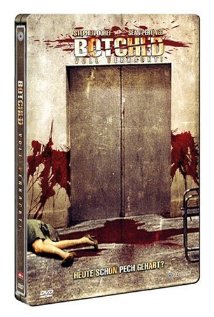 Horror comedy is a genre that is often frowned upon.  For a lot of people, they just don't blend well when they set out to do both.  For me, I've always been impressed with what I've watched of this genre, but I tend to only watch movies I know I'm going to enjoy.  Botched is a movie I enjoyed.  I wouldn't even call it a horror comedy, it's more of a dark comedy with lots of splat thrown in and performances so OTT you can't take it as anything other than comedy.  That's not to say it doesn't deliver on the blood and gore though.

Botched starts off as a crime movie, about a job gone wrong.  Ritchie (played by Stephen Dorff) has one last chance to redeem himself to the mob, and what seems like a routine theft and hostage mission turns into anything but, as the criminals and the hostages start getting picked off by a deranged killer, armed with a sword.  Even scarier though is the sadistic, overbearing, religious relative though who's making him kill so she can provide sacrifices to her God, but all the dude wants to do is play with his dead bodies he's collected.

The kills in this one are splatty, but what makes them even better is the musical scores that accompany them. Even better is the ridiculous Russian accents from a cast who aren't even Russian.  But that's the whole point of Botched.  It's supposed to be ridiculous and OTT, and it certainly doesn't let down in that aspect.  It also doesn't become a parody of itself either.  It has just the right amount of everything.

Pick this one up if you come across it.  It really is quite hilarious, with enough blood for the innrer splatter hound.
Posted by Fistfull of Boomstick at 18:57