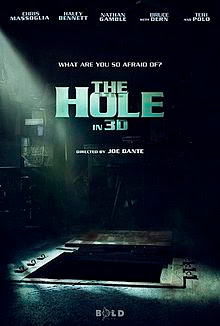 Ever since I was a kid and all through growing up into young adulthood, I've always loved movies where kids are the heroes.  Jason Eisener calls the types of movies I'm talking about ''treehouse movies.''  Films like Monster Squad, The Goonies, The Lost Boys and movies along those lines, where the kids are the heroes and have grandiose adventures or need to save the day when the adults don't believe them.  One of the masters of these types of movies is Joe Dante, who has brought us classics such as Gremlins and the underrated Small Soldiers.  The Hole, like Small Soldiers, is also an underrated movie, and meets the criteria of the movies where it's up to the kids to save the day.

The Hole is about 2 brothers who move to a small town with their mother and find a mysterious hole in their basement.  It turns out that the hole is a gateway to hell and if opened, your deepest fears will manifest and haunt you.  So it's up to the brothers and the hot neighbor to solve the mystery and overcome their deepest fears in the process.

This is a horror movie the whole family can watch, but it still does deliver the goods.  It has all the classic horror characters we've all grew up watching - little creepy ghost girl, killer toys, clowns etc.  They aren't even used lightheartedly.  They really are horrific.  Joe Dante has really ensured that a lot of families will get a good ol' scare.  More impressive though is the character development.  The film really focuses more on the characters than they action and thrills (although it still has both of these and much more), but it's more effective as we get to know the characters and know what really frightens them.  Another thing I love about this movie is the fantasy of it all.  It really is an original gem in a genre where, in recent years, hasn't showed much in the way of fantasy and imagination (not that I don't like slashers, some remakes and zombies etc).  It's just nice to see a movie that goes that extra mile.  Most of all though, it's fun and the characters are ones I rooted for every step of the way.

Not a cinematic masterpiece, but a fun movie with plenty heart, originality and horror for the whole family to enjoy.  It really gave me that feeling I get watching the aforementioned movies.
Posted by Fistfull of Boomstick at 08:08

Email ThisBlogThis!Share to TwitterShare to FacebookShare to Pinterest
Labels: Other