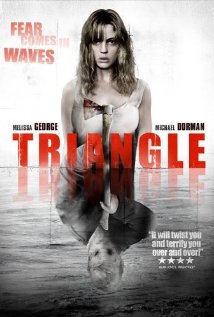 My Christopher Smith mood hasn't passed yet... Next up is Triangle and to be honest, I don't even know how I'm going to review this.  I'm the type of fella who just types and publishes the first draft.  Everything you see is off the top of my head, so why the hell would I review a movie that goes over most peoples?  I'll do my best but bare in mind I probably won't do it any justice.  Quickly though, if you just want a simple reason to watch then heed my words: this is one mindfuck of a movie that needs to be seen.  This will glue your eyes to your television.  It's twist and turn and twist and turn and one hell of a mystery.  Plus, imagine The Shining and Groundhog Day going to sea, mating and producing a deformed child.... those vibes are in this movie.  This is a horror movie with brains and should be shown to everyone who dismisses horror as trash, mindless or unintelligent genre.  It's unlike any other horror movie I've seen and an ambitious effort from an exciting filmmaker.

The plot on paper is simple, but what you see on the screen isn't as straightforward; a group of friends on a yacht are desperate for help after a storm.  Suddenly, a ship appears and they see someone looking down at them from the deck.  When they get aboard the ship it's empty.  If I say anymore I may give away spoilers, just know what ensures is an unpredictable surreal nightmare and it's friggin' incredible.

The script took Christopher Smith 2 years to write and it really paid off for him.  At the end of his career, this will be the movie he'll probably look back on as his 'masterpiece.'  Or at least one of them, because let's face it, he'll make more.  Any writer who wrote this would be proud of their work though I'd imagine.  It's by no means my 'favorite' Smith movie, but it is the most rewarding to watch as it really challenges me each time I watch it.  Watching this, I gain more than simple enjoyment.  To be honest though, I don't know my favorite Smith movie.

This isn't purely a horror movie.  In fact, it's more mystery than it is horror.  There isn't much in the way of gore and jump scares.  Triangle is a constant evolving nightmare that doesn't let you go.  Visually, it's very dreamlike and surreal.  The cinematography is absolutely stunning.  Melissa George is the central character and practically needs to carry the story on her own.  Her performance should have won a damn Oscar if the Oscars could climb down off their pedastal and admit that horror movies are as much of an art form as any other genre.  It actually amazes me that modern horror movies do not get the artistic credibility they deserve outwith the community considering the imagination that is put into them, along with great writing, directing and performances.  Triangle is smarter than a lot of movies.  Melissa George's performance embodied her character and one flaw from her could have ruined this movie.  She was perfect though, and she made this movie excellent.

Triangle needs to be seen.  NEEDS!  This is a mystery that doesn't stop until the very end.  It keeps throwing you off guard and has you thinking 'WTF' when the end credits role.  So if you want a movie that challenges you then check this one out.  You won't be disappointed.
Posted by Fistfull of Boomstick at 05:15