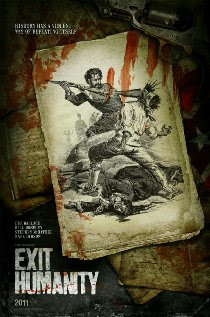 The zombie sub genre is the horror equivalent of an electronic music genre known as dubstep.  Just like dubstep, zombies have become so popular that everyone does it at some point.  Just like dubstep, zombies are easy to create.  Basically what I'm trying to say is, there's so much zombie movies out there that it feels overpopulated, the same way dubstep music is stale.  That doesn't mean to they aren't both enjoyable.  I enjoy a good generic zombie movie and I enjoy a good generic bass heavy dubstep track, but I don't go out my way to find either.  However, when something comes along that offers a fresh approach... even just the smallest of changes... then I'm interested.  Enter Exit Humanity, a period piece set in the Civil War period with the undead thrown into the mix.  Made by John Geddes (an exciting independent director along with frequent collaborator Jesse T. Cook, are churning out some ambitious low budget gems with their Foresight Features company), this is his debut solo effort (he co-directed a little gem of a cannibal movie with Cook called Scarce).  Forefront Features is starting to make a little name for itself in the world of indie horror.

Exit Humanity is the third effort from Forefront Features (following Scarce & Monster Brawl) and it goes into totally new territory than the previous productions.  What I love about this company is, that despite shoestring budgets, they like to be a little different.  By no means are they breaking any boundaries, but just a little change here and there can breathe new life into genres that have been done to death.  Take Exit Humanity, instead of going for the gore and scares, it favors a dramatic approach.  By setting it in the Civil War, throwing in some animation and keeping the zombies secondary, it really does stand out as fresh, especially since there's well over 700 zombie films the last time I checked.  Exit Humanity is a drama that focuses on character.  It's slow paced and low on action, but the story is interesting enough to keep it engaging.  It reminded of comparisons such as Dead Birds and Ravenous.

The movie is strong in many departments; the settings and scenery really capture the era that it is set in.  Even more impressive is the comic-book like animation sequences used to show flashbacks.  Those were my favorite scenes in the film.  The performances were all outstanding and featured cameos from Stephen McHattie, Dee Wallace and everyone's favorite Southerner, Bill Moseley.  The script is good, the story is engaging and the characters were strong.  Furthermore, the score is beautiful and really does a lot for the movie.  However, I think it could have benefited from a shorter duration, as a few scenes drag on a little more than they need to.

Overall, this is a good little low budget zombie movie that's worth checking out if you enjoy the zombie sub genre but want to see something new thrown into the mix.  It may be a little too long, but it's not boring.  Geddes is a director with a big future and Forefront Features is a company I support.  They haven't got it perfect yet, but I know they will when their budgets get bigger.  All of their movies so far have been made on shoestring budgets and when you take that into account, there films are pretty damn great.  They make the best of what they have and it pays off.  I can't applaud them enough and can't wait for their future releases.


Posted by Fistfull of Boomstick at 08:06