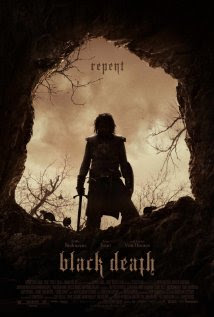 Since his debut feature, Creep, in 2004, Christopher Smith has become an exciting name in the world of horror.  When it comes to a Christopher Smith movie you really don't know what to expect.  He's a director who likes to tell a story, and every film he does is like nothing he's ever done before.  Now 4 movies in, he's really proved himself to be a prolific filmmaker who is really passionate about all of his projects.  This shines through in his films and it makes them so much better.  In his 4 movies to date, he's done everything from make us laugh to completely fuck our minds, but when it comes to the horror elements then he really knows what he's doing.  Other than Creep, none of Smith's movies have been solely horror; Severance was a hilarious comedy that managed to maintain a constant unease and tension throughout before going horror on our asses.  Triangle on the other hand was one of the best mysteries I've ever seen and it had me questioning my sanity.  It was so damn trippy.  Black Death isn't a horror movie, but it does have strong horror elements.  What is lacks in horror though, it makes up for in other areas.

Black Death is set in 1348, a time of bubonic plague and religious superstition in England.  It follows a young monk and a group of soldiers who travel to a village that has been reported to be free of plague and not only that, but there are rumors that the dead are being brought back to life.  The young monk has to lead the soldiers to the village, and the duty of the soldiers is to sniff out a Necromancer, kill the residents and do God's work.  The quest to the village is dangerous, but the village might just prove to be their biggest challenge yet and many twists and turns take place, secrets are revealed and all that fun jazz.

Any movie that stars Sean Bean is going to get watched by some for that reason, but it's young Eddie Redmayne who shines as the young monk who believes in mercy.  However, his intentions have selfish motives that are perhaps too human for his comrades to understand.... Of course it's about a girl.  Sean Bean as Ulric is a merciless, hate driven warrior delivering God's message with his sword.  We've seen him play a similar role in Lord of the Rings, but when it comes to a hate driven medieval warrior then who's better than Sean Bean?  I can't remember the last time I watched a movie with him set in a century of technology.

Black Death is deliberately grim, but it is also entertaining and thought provoking.  Their journey is dark and dangerous, plague has devastated the lands and the people and the movie makes sure it captures this element.  However, that doesn't mean it's going to deprive us of a battle scene with the odd decapitation.  Once they reach the village, everything is peaceful and everyone is healthy.  Instead of celebrating it, they assume its magic and seek to capture the one responsible.  However, the villagers are aware of their intentions and everything becomes surreal.  It's also in the village that Smith has his Wicker Man and Herschell Gordon Lewis moments.

I really enjoyed this movie; it has elements of horror, thriller, mystery and man on adventure movies which really blended in a realistic fashion.  This movie wasn't fantastical in any way; it was gritty and realistic.  The movie was heavy on religious superstition and it was thought provoking as a result.  I can'r recommend this one enough.
Posted by Fistfull of Boomstick at 09:57