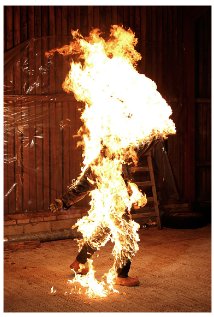 The Reverend is a movie made with the intention of stealing my heart it would seem.  To start with, it stars the incredibly hot Emily Booth, who's boobs and horror presenting have graced my screen regularly for years, as well as her roles in some trashy B movie gems like Evil Aliens.  Then there's cameos from Rutger Hauer, who let's face it, is a living GOD to a helluva lot of genre fans, myself included.  There's even a couple of small cameo appearances from horror icon Pinhead, although he goes as his Christian self here.  He might not be rockin' the pins this time, but it's always great to see Doug Bradley (it's just a shame he doesn't get that many major roles as he's a talented actor).  Also in for the ride is Tamer Hassan, a dude I've been a fan of for years.  He's one of the kings of modern day British 'geezer' cinema, and often portrays thugs and hooligans in his flicks, but I really love his work (especially Football Factory).  Tamer is an underrated actor who's unfairly dismissed because of the way he gets typecast, but he's one of the best villains in modern British cinema.  Watching his films you wouldn't think that in real life he's actually an easygoing bubbly character.  Along with Stuart Brennan, he steals the show here.

Stuart Brennan stars as The Reverend, a young man of the cloth, fresh from seminary school, he is assigned to his first parish in a small village in the country.  On the surface the village seems peaceful, but there's a dark criminal underbelly, all ran by Harold Hicks (Hassan).  One night, The Reverend is bitten by a vampire and he is turned into a bloodthirsty fiend himself.  However, instead of using his powers for evil, he uses them to do God's work and clean up the village... by preaching to the churchgoers or by feasting on the criminal muck.

The Reverend is based on a graphic novel of the same name and is unlike other vampire movies.  Here, The Reverend vampire is a good guy and it's the humans that are the evil.  In a way, The Reverend is like a superhero.  Furthermore, there's no vampire cliches like crosses and garlic, as The Reverend uses the cross as his ally.  The Reverend is also indebted to the Western.  It might be set in rural Britain, but it wears its spaghetti influence on its sleeve; The Reverend is the hero who enters the corrupt town and clears out the scum while a blues guitar soundtracks his mission.  Stuart Brennan is great as our unlikely action hero and steals the show.  Tamer Hassan is Tamer Hassan like we've seen him before, albeit with a quaint country dress code.  When you need an intimidating villain in a low budget British film though... Tamer is your man.  I'd love to see him get a chance on a bigger movie.  Emily Booth is both a pleasure and a disappointment; she's as beautiful as ever and her performance shows that she can act outside of splatstick, sleazeball trash.  It's a different role for her and it's nice to see her try something new and do a good job, but she plays a prostitute and doesn't show her marvelous assets.  Some boobage would have been awesome.  Rutger Hauer and Doug Bradley on the other hand are nice to see, but they're only small cameos.  Rutger is the main name being used to market this, so if you buy it for him then you might be let down as he's only in the prologue.

There is some gore here to satisfy your thirst for the red stuff, and there's some pretty cool fight scenes.  It does focus more on story over action though.  Many reviews are criticising this already.  To many this will be a turkey but it's not bad at all.  By no means is it great, but it's an enjoyable way to pass 2 hours.  The ambition perhaps outstretched the budget, but it's pretty decent considering it was shoestring.

Overall, it's not perfect but it's worth checking out.
Posted by Fistfull of Boomstick at 06:38