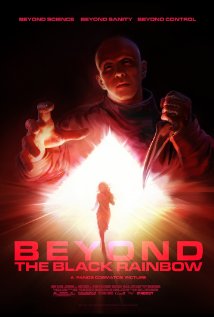 Okay so imagine this...

David Lynch, David Cronenberg and Stanley Kubrick all have a little too much to drink one night and even get a little high.  Then they all decide to make a baby.  That baby might very well be Panos Cosmatos and his debut feature, Beyond the Black Rainbow.  It isn't a pretty baby, it isn't a fun baby and it doesn't mix well with others.  It probably has play dates with the little mutant from Eraserhead, and they sit around listening to droning synth music in the dark.  You know where I'm going with this?  I sure as hell don't, but basically what I'm saying is that Beyond the Black Rainbow is a long, slow, weird movie.  It's really artsy, probably pretentious to some and it will bore the Jesus out of the most religious of Christians.  Then there's us genre film geeks... We'll dig it.  I really enjoyed this one but if I went back and watched it again then I'd choose a night time setting.  I watched this on a sunny afternoon after a long day of talking on telephones with people wanting to book chocolate from me (my job is chocolate fountain hires for weddings and events if you're interested).  So, when you watch this, make sure it's dark outside, if you like getting high then get high and try to imagine you're in a bleak quasi-futuristic dystopia.  Or be like me, sitting sober on a sunny afternoon with a glass of lemonade and a cheese and ham toastie.  Either way, it's all good.

It is set in a futuristic 1983.  Held captive by Dr. Barry Nyle in the mysterious Arboria Institute, a young girl tries to escape.  However, the Dr. Byle isn't prepared to part ways with his most treasured creation just set.  As she tries to escape, she discovers the dark secrets of the mysterious prison.

As much as it does remind me of a love child of Lynch, Kubrick and Kronenberg, that's not a bad thing.  Panos Cosmatos has created a film reminiscent of the weird sci-fi of yesteryear.  Very bleak throughout, psychological and grim, Beyond the Rainbow isn't exactly an 'enjoyable' movie.  It isn't fun in the slightest, but if you're in the mood, then it hits the spot.  Visually, it's absolutely stunning and looks like something Kubrick would make if he was inside a realm created by David Lynch with Angelo Badalementi and John Carpenter controlling score duties.  A criticism I have is that sometimes it favors style and surrealism over character development, but I suppose this was done to add to the nightmarish feel.

Even though this sin't for everyone, I think fans of surreal cinema will love it.
Posted by Fistfull of Boomstick at 07:25