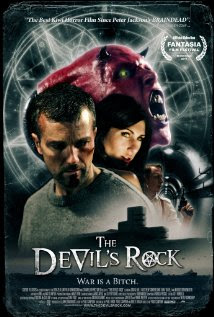 Like many horror fans, I love Nazi's.  Well, we don't love real Nazi's, but Nazi's in horror are awesome villains.  I mean, there's not many things in this world more evil than Nazi's, so their ideal for a genre that's meant to scare, shock and disturb.  They're also good for satire and comedy, and when Nazi's are made to look like idiots then that's just as good.  In recent years, Nazi's have been popular in our beloved genre; the Norwegians brought us Dead Snow, where the Nazi's returned from the dead to feed on some skiers.  Another one worth mentioning is Outpost, a very impressive low budget supernatural gem.  2012 has been great for Nazi's, with Iron Sky exposing what really happened after the war and giving us an insight into a grim future where Nazi's will return from the moon (you all think it's a movie... It's prophecy I tell you).  And who could forget the Asylum's Nazi's At The Centre of the Earth?  Once again, those rascals have given the world a timeless piece of art (for them it's actually quite good.  I love those guys).  If you want to see Hitler as a weird robot thing then look no further.  The Devil's Rock, despite a limited theatrical release did not enjoy such recognition and still remains relatively unknown, which is a shame because it's the type of movie you'd like to go to the cinemas and have an option of seeing.  In an era where horror churns out a lot of similar movies, it's great to see a film come along and use a little imagination.  We've seen the occult Nazi thing done before, but it's fresh to see again here.

Paul Campion's full length debut is about 2 soldiers who are sent to the channel islands on the eve of D Day to destroy German gun emplacements in order to distract Hitler's forces from Normandy, only to  discover a Nazi plot to unearth a demon to win the war.  It's not Hellboy though, but many compare it to The Keep.

The Devil's Rock takes 15 minutes to really get going to stick with it.  I wasn't really feeling it until then but when it got going I was hooked.  This is a smart horror movie and I recommend it if you like slow burning horror.  If you want a gorefest then you'll be let down I'm afraid,  It's very dialogue driven and slow paced at times, but the finale is bloody and overall it's a rewarding experience.  It's by no means perfect but I'll watch it again, as I did get a big kick out of it.  I can't wait to see what the director does next, but let's hope he continues to write outside of what's ''current'' and follow his imagination in future.  A lot of effort was put into The Devil's Rock and it is based on real myths.  That's worth watching it alone.
Posted by Fistfull of Boomstick at 20:19