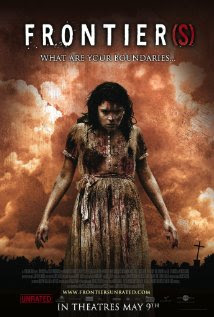 Ahhhh.  The French.  It seems like only yesterday that the French were releasing excellent movie after excellent movie in the world of horror.  It took off big time in 2003 with Alexandre Aja's masterpiece High Tension (but there were others before like Irreversible that turned some heads and churned some stomachs), but since 2008 it hasn't been all of the buzz at all, but it has been influential to this day.  European horror the past couple of years has been making a name for itself, but not a lot has been French recently.  Maybe it's because most of the directors flocked to Hollywood and made some kick ass movies there.  I really love French horror though.  The 'New Wave of French Horror' wasn't unique in its concepts, but it was ultra-extreme in its execution of concepts, visually unique (dare I say even artsy?) and often had a political message or social commentary thrown in.  Frontier(s) is one of the best of a decent bunch of movies from the 'New Wave...'  As great as movies like Martyrs and Inside are... you can't watch them a lot.  Frontier(s) on the other hand is dare I say... fun.  Fucked up yes.  But demented fun.

Frontier(s) starts off as a crime movie following a group of criminals who have just stolen some money and need to escape a riotous Paris.  On their way to the border after they escape the city, the stop at an Inn.  Little do they know that the inn is run by neo-Nazi cannibals who aren't quite as hospitable as your every day bed and breakfast, but probably more so than a lot of Scotland's Premier Inn's.  When the violence starts, we're treated to gruesome torture porn and a demented family of Nazi's.  It's TCM-meets-a Fourth Reich.  The violence is gruesome and visceral and pretty constant, but it's an entertaining gorefest that fails to disturb because of the absurdity and silliness of it all.  The head of the family is quite comical because of how serious he acts.

I'm not criticising though, because it is a great movie.  I'm probably sick in the head for saying this isn't disturbing.  The content isn't for the faint of heart, but there's much worse out there and most horror fans should be able to take this with a pinch of salt.  It's basic torture porn made by a very talented filmmaker.  The political undertones of the movie are apparent, but presented with exaggeration.  The politics of the movie are left wing and the purpose is to highlight right wing politics at their most extreme.  I don't care about that stuff but I know some people do.  I just wanted to see a bunch of people get killed to be honest with you.

Not quite the masterpiece of Aja's High Tension, not as silly as Sheitan and nowhere nearly as disturbing as Inside.  I would place this near the top of the New Wave of French horror though and if you're a gorehound then you should check it out.  I enjoy it, but it is far from perfect. If it had that little something extra then it would be great.
Posted by Fistfull of Boomstick at 15:35