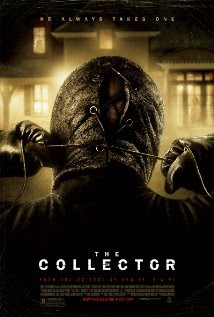 I need to stop avoiding movies that are advertised as ''From the creators of Saw'' because I might miss out on gems like this (plus the first 2 Saws were good).  A lot of negative reviews also put this film low on my to do list, but finally I bit the bullet and loved the taste of the lead.

The Collector is similar to the Saw franchise in some ways, but it takes what is good about them and crafts a unique movie with a terrific villain.  To start with, the traps used to kill people in this are similar to Jigsaw's from the Saw movies.  However, Saw can always be praised as being a series for gruesome, violent deaths.  The Collector most certainly has gruesome, violent deaths but it doesn't rely on them.  Instead, they're an additional treat in a cat and mouse movie that is full of atmosphere and suspense.  Really it has all the ingredients of a great horror movie about a maniacal murderer; an interesting villain with unique killing methods, a lead character to root for and great kills thrown in the mix.  Furthermore, in addition to the atmosphere and suspense, the film is dark and claustrophobic and isn't apologetic for being so either.  All of these elements are aided by intentionally dirty cinematography that makes it reminiscent of an 80's exploitation film and an in-your-face score that fucks with your mind.  Another great thing about this film is that despite it's unforgiving, relentless horror, it's a fun flick.  If you're not a fan of horror then you're probably going to hate it, but it's the type of film made for the love of horror.  Call it a slasher, call it torture porn, but to me, it's just a fantastic horror movie. 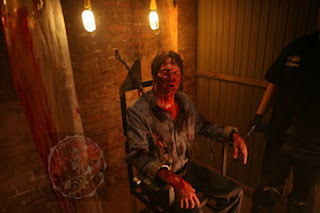 The sequel is out later this year and I for one cannot wait to see it.

Posted by Fistfull of Boomstick at 10:26