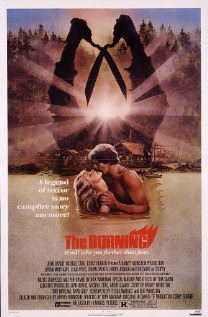 A janitor at a summer camp is burned after a prank goes wrong and becomes disfigured.  After being released from hospital, he returns to the camp to take out his frustrations on some pesky teenagers with a pair of hedge clippers.

This is heralded as a classic among slasher fans, and even though I really enjoy it, I think there was much better slashers in the 80's.  There is one moment though that is out of this world amazing where the deranged killer chops up the teenagers on a raft.

I really don't have much to say about this.  For me, it's just a run-of-the-mill slasher that's enjoyable but not spectacular.  It is worth a watch though and has some nice kills.
Posted by Fistfull of Boomstick at 13:47