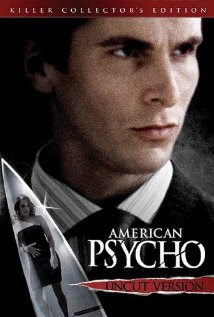 American Psycho is without doubt, one of the greatest movies ever to grace the universe of cinema.  Based on the excellent (and even more shocking novel) by Brett Easton Ellis, it stars Christian Bale (in his greatest performance to date) as Patrick Bateman, a wealthy executive banker who's obsession with materialism and desire to be better than his peers is only outweighed by his thirst for blood.  It's dark, it's chilling and it's laugh out loud hilarious.

American Psycho is more than just your basic movie about a deranged killer; it's a satirical take on the New York Yuppie culture of the 80's, as well as social structure and societies obsession with materialism.  Bateman represents a man wanting to fit in, a man who feels the need to outdo his peers and a man who needs to fill the emptiness inside him by committing atrocities.  And when he doesn't get what he wants he throws hissy fits of extreme proportions.

Everything in the film is representative of something - materialism, commercialism, megalomania, social status, the state of society.... There's a lot of depth here and it's presented to us in a violent and very funny way.  If you don't want to read too much into its themes then you can still enjoy a hilarious dark comedy full of memorable scenes, dialogue and a performance by a terrific actor who embodies the character so well you forget it's acting.  Christian Bale was Patrick Bateman and he made Patrick Bateman one of the coolest, most lovable characters in the history of cinema.

Contrary to what you might think, this film isn't all that violent.  There is blood and some maniacal scenes, but it has just the right balance of violence, funny, chilling and thrilling.  It's a modern masterpiece that deserves to be held in the same esteem as Psycho (because it's much better than Hitchcock's classic).  For me, this is one of the best movies of all time.  I love Patrick Bateman.
Posted by Fistfull of Boomstick at 07:10