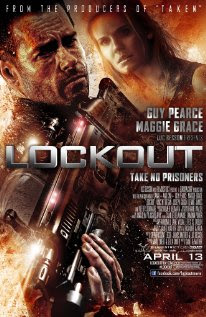 ''Escape From New York in space'' is the most common description used to describe this movie so far, and even though you can see why, for me it was more like Die Hard...in space, but not as Die Hard in space as Assault on Dome 4.  Anyway, that's not relevant, because when a movie is described as either one of those then you know what to expect - a mindless, fun popcorn movie with lots of action and terrific dialogue from our hero, Snow (played by Guy Pearce, who is particularly amazing in this type of role and should do more films like this).

Lockout is about a man called Snow, sent in to space to rescue the President's daughter from a prison outbreak - or face the alternative option of a 30 year prison sentence for a crime he did not commit.  The prison contains some of the most notorious criminals in the universe and they are also being experimented on and turning even crazier as a result.

The performance of Guy Pearce is the best thing about this.  He does a great job as the action hero and should do these kind of roles more often.  He's a great actor, but this is definitely one of his more fun roles.  His sarcasm and the way he carried himself was great fun to watch.  The villains were good enough also, particularly the rapist played by Joseph Gilgun.  Vincent Regan was just cool and bad ass as the lead villain also.  The action was good and the f/x were nice on the eye.  Sure there was a few weaknesses, but all in all Lockout is great popcorn entertainment and perfect if you just want to sit back, relax and watch some good wholesome fun.
Posted by Fistfull of Boomstick at 10:11