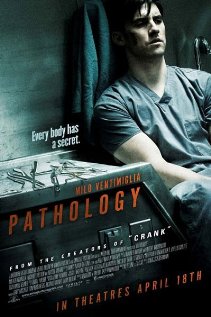 Neveldine/Taylor are directors who definitely have their haters.  As writers, they tend to split opinion as well.  Personally, I love them and if their name is attached to anything then I'll check it out.  Pathology wasn't directed by Neveldine/Taylor and it doesn't look like a movie they'd direct either.  It was written by them however, and if you didn't already know it was them who wrote it then you wouldn't think it was their work.  It's a smart movie, which focuses on story and the development of characters, exploring humans darkest desires, as opposed to their usual ridiculous fun action movies.  To think they got the idea for this when they were drunk as well...

Pathology follows a group of medical students, who have come up with a little game to pass the nights - committing the perfect murder.  Ted Grey (Milo Ventimiglia) is new to the class, and finds himself drawn into the murderous fun escapades.


I seen this in an empty theatre on a Tuesday afternoon with 2 friends back in 2008.  We were blwon away by it and it's become one of our favorites ever since.  It's a dark, twisted thriller full of sex and murder but don't let that put you off (not that it would I'm guessing), because it's a very intelligent movie.  It's immoral, mean spirited and nasty.  That's why I love it.


Violent fun that exceeds expectations of another mindless, fun popcorn movie.  It's a wonderful thriller with a black little heart.
Posted by Fistfull of Boomstick at 18:03