The winner of the Grindhouse trailer competition and the best of the fake trailers to be adapted so far (I have high hopes for Thanksgiving though).  Hobo With A Shotgun is the debut feature from Jason Eisener (who also directed the excellent short Treevenge) and it's a fun, violent, blast (literally) that delivers justice... ONE SHELL AT A TIME! 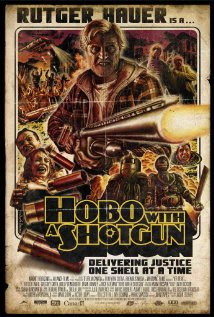 Hobo With A Shotgun is a genre fans wet dream.  It's not only a tribute to the exploitation films of the 70's and 80's - it's exploitation at it's most exploitation-y and it's a helluva lot of fun.  It stars genre favorite Rutger Hauer as a hobo who decides to go all vigilante and clean up the streets of ''SCUM TOWN'' with a shotgun.

You get a good feel for what the movie is going to be like near the beginning.  It starts off very beautiful with the Hobo entering the city on the train.  It's a bright opening and we get an immediate feeling that the Hobo is a nomad, just looking for a place to start a better life.  But he's chosen the wrong city and when he arrives there's brawls, bum fights and a pretty inventive decapitation, where we get introduced to villain The Drake and his two brats Slik and Ivan.  The blood rains and never stops pouring from then on out and we're treated to some beautifully nasty shit throughout.  This isn't a basic vigilante movie though and it hits us with some nice surprises, namely, The Plague - demon assassins responsible for the death of Christ and Abe Lincoln, and the new cult heroes of exploitation cinema.

Aside from the violence and laughs, there is a lot of sweet moments here between the Hobo and Abby (a prostitute with a heart of gold).  In the midst of all the carnage, this gives the film a little something more.  Furthermore, it's a visually stunning piece of work with a kick ass synth soundtrack reminiscent of 80's John Carpenter.

An instant cult classic and an exciting debut for a young director with a bright future.  It's an insanely fun, violent ride from start to finish.  One for the beer and pizza nights.  This is the type of film you'll want to show all your friends and then they'll go show their friends.  Some will love it, others will be repulsed by it but no one will ever forget it.
Posted by Fistfull of Boomstick at 07:35