After seeing House of the Devil, like many horror fans, I was immediately excited about the next Ti West project.  He's a director who is standing out for me and one my current favorites not only in horror, but film in general.  I waited months on this coming to DVD in the UK and when it finally arrived I watched it first chance I got, with extremely high expectations?  So did it live up, exceed or let down? 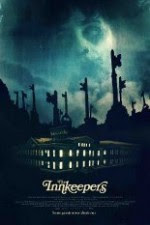 First off, I really did enjoy The Innkeepers.  It was a good movie, but I think it's a better hang out movie than it is horror.  It's a slow burner, which is Ti West's ''thing'' and it does work well.  We get to know the main characters, we get to like them and when nothing is really happening, they do enough to keep us interested just by watching them goof around and slack off.  It really captures the feeling of a slow night and 2 employees trying to pass the time.  On this level, The Innkeepers works extremely well.

It stars Sarah Paxton and Pat Healy as 2 employees of the Yankee Peddlar Inn, doing one last shift before the hotel closes for good.  It's a slow night and there aren't many guests, so the pair decide to pass the time by doing a little ghost hunting as the hotel is rumored to be haunted.

The performances from both are perfect and I can't think of a criticism.  They made their characters extremely likable, even Pat who was a bit of a dick.  A funny dick though.  The kept the movie progressing along nicely despite the lack of goings on.  The slow burning didn't get boring either and worked for the most part before the final crescendo of chaos and terror.  However, the atmosphere could have been a little eerier because at times it felt a little tame.  That's really my only criticism.  The Innkeepers was tame, and despite a decent final act, it would have been better if they turned the volume up to truly demented and let it deafen us.  It was nice, there was some cool ghostly moments but it could have been longer and a whole lot more crazier.

Overall, it was a great throwback to classic ghost movies and fresh in the current horror climate.  I'm still a huge fan of Ti West after seeing it and it didn't let me down.  Sure, it could have been better in some parts but that doesn't mean to say it wasn't still a fine effort.  Bring on V/H/S and The Side Effect.


Personal Thought: Ti West should make a slacker comedy in the vein of Clerks and Dazed & Confused.  I think he'd do a great job.
Posted by Fistfull of Boomstick at 10:27