Since I started my blog a few months ago, I've only covered movies that I've watched this year, whether it be first time watches or repeat viewings.  However, I've been a film fan my entire life and fell in love with horror when I was just a bairn (that's Scottish for child) and spent countless number of hours in front of a screen.  I think it's about time I start covering the classics, the gems and the rubbish that I've watched over the years as opposed to just what I'm watching this year.

Anywho, a hero of mine, like he is to many horror fans, is John Carpenter.  He's not only one of my favorite horror directors, but he's one of my favorite film directors of all time.  I'm going to cover all of his movies eventually, but I thought I'd start with the made for TV anthology from 1993, Body Bags.  In this one, the great man not only directs the 2 best segments, but he also serves as a narrator zombie and introduces each one (kinda like the Cryptkeeper but uglier and more rock 'n' roll looking).  Tobe Hooper directs a segment, and the stars include many icons us horror fans adore. 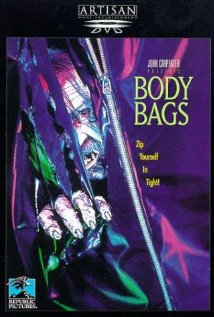 90's horror to many horror fans was a dark period, but I think it's pretty great.  I was a kid in the 90's though and wasn't exactly up to date on my horror films, but looking at my collection, I have many great flicks from that decade.  Sure, it's not the heyday of the 80's or the resurgence of the 2000's, but I think the 90's is okay, especially for producing fun made for TV and straight to video little numbers like Body Bags, an example of one of many 90's horrors that will never win any accolades, but will still entertain.  This is ideal ''rainy night'' horror. 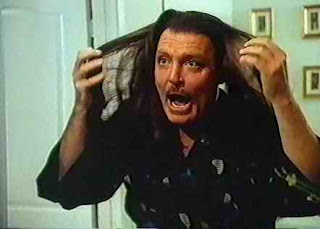 Posted by Fistfull of Boomstick at 14:35