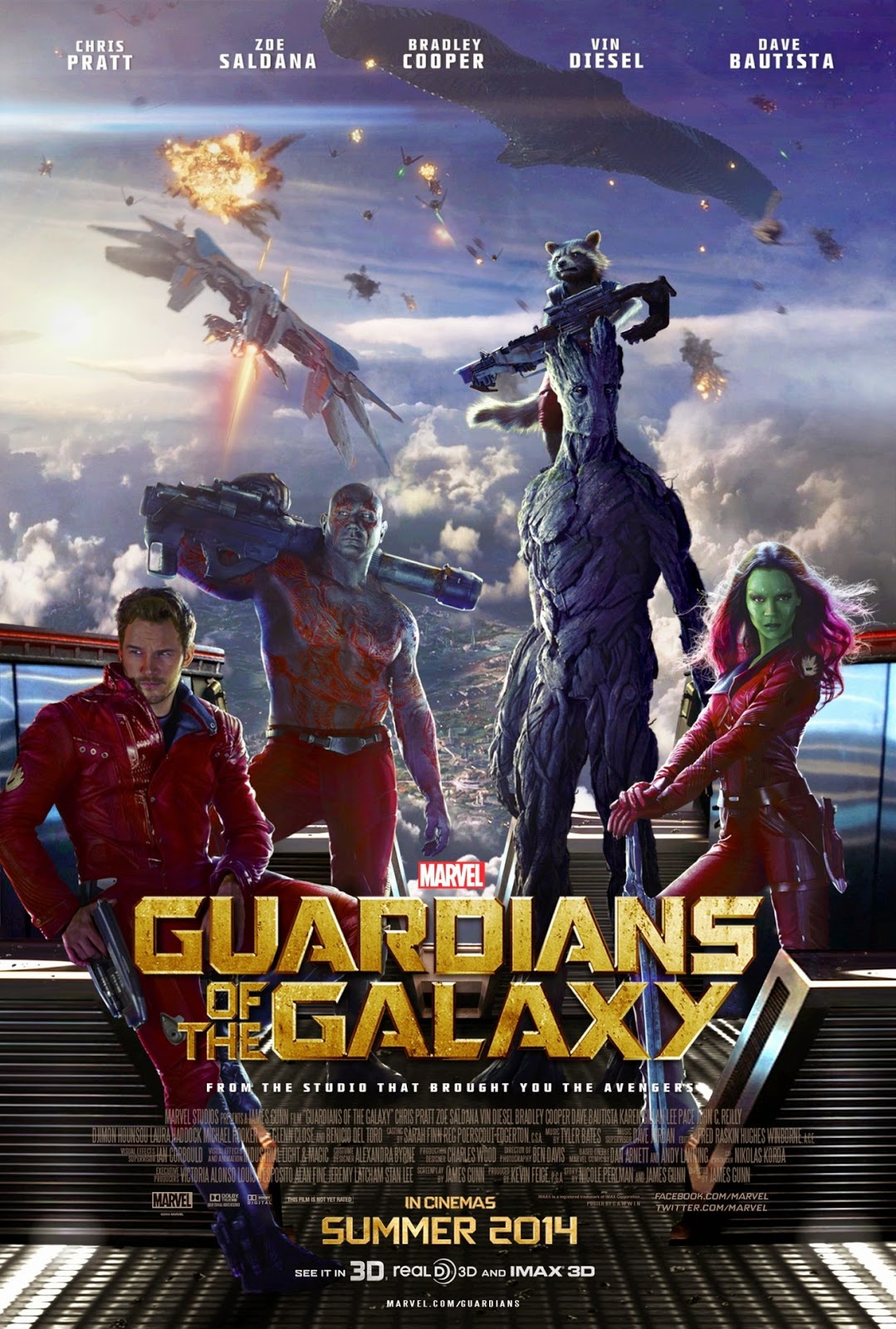 If you haven't heard of Guardians of the Galaxy this year then you've been living under a rock.  It's been everywhere, and as a result has become somewhat of a pop culture phenomenon with massive franchise potential.  It's been embraced by average cinema goers and cult film fanatics, fanboys and families, ferrets and grandmothers alike.  Everyone and their mother seems to have embraced this movie.  It's been a critical and financial success worldwide, the same as the majority of the Marvel movies.  So what makes this different than your average superhero movie?  Why is this huge summer blockbuster being covered on this crappy horror blog a few posts above John Waters trashy opus Pink Flamingos?  I've never been one to review big budget, Hollywood blockbusters on here despite being a fan of a lot of them.  Well my reason for reviewing this is simply because I've fallen in love with this movie like I have every other James Gunn feature.  He's one of my heroes and a director I follow passionately.  I'm not just a fan of his work, I'm a fan of the person.  He's a good humored, funny, passionate film fan with a deep appreciation for cinema, from the Scorcese classics to the Troma toilet movies where he made his start in the industry, having penned Troma's take on Shakespeare, Tromeo and Juliet, which can only be described as an unheralded masterpiece of film.  I don't watch a lot of the Marvel movies these days as I don't find them all that appealing.  If I do watch them it's because I'm at the theatre and my friends want to go see them.  I've enjoyed them for what they are, but they haven't excited me.  So how did I feel about one of my heroes signing on to make Guardians of the Galaxy instead of another dark comedy I'd become accustomed to and loved?  Well to be honest I was looking forward to it.  I knew a James Gunn blockbuster would still be entertaining, even if it was to be another standard throwaway superhero flick.  What I didn't expect was the magical adventure that made me feel like the mesmerised child who just watched Star Wars for the first time.  For the 2 hour duration of this feature I was a 5 years old again completely immersed in adventure so much I felt a part of it.  Not only has James Gunn made the greatest space adventure of all time, he's also conjured up magic that's going to live in the hearts of millions worldwide for generations to come, much like the classics by Spielberg and Lucas.  Not only has James Gunn established himself as one of the finest working directors in the world today, he just so happens to have gained a foothold on a path that will potentially lead him to legendary universal status like the directors just mentioned, and just like them, he'll capture the hearts of many, who like me, have a romantic attachment to cinema.  All across the world right now are children lost in their own imaginations daydreaming of space voyage and adventure, and James Gunn has stumbled on to the franchise that should indulge the fantasies of those who spend moments of their day with their heads in the stars.

I loved this, as you can probably tell, but what made it so special is that it's still very much a James Gunn movie.  His strange sense of humor hasn't been compromised at all.  It might not be dark and twisted like Super or a disgusting body horror like Slither, but his stamp is visible in every scene.  There's cameos by Greg Henry, Nathan Fillion, Rob Zombie and Lloyd Kauffman once again and there's a substantial supporting role for the great Michael Rooker.  It should give my fellow geeks a huge thrill to see these actors strut their stuff in the biggest movie of the year.  Personally I loved seeing Gunn's band of misfits light up the blockbuster of the summer.  Other than Bradley Cooper and Vin Diesel, the cast doesn't have big box office names at all, and Vin Diesel's character Groot repeats the same 3 words the entire movie.  Chris Pratt, mostly known for his work on the excellent Parks & Recreation, did not go into this as a star name, but he's came out of it primed for the big time.  Benecio Del Toro has a small role as The Collector which made me happy as I feel he's one of the best actors on the planet who is criminally forgotten by the mainstream.  Gunn has embraced his roots as a B movie genre film maker by casting his type of actors, and the results have been incredible, especially the hilarious star making performance of Dave Batista.  As a wrestling fan I can assure you he wasn't that good at anything in WWE, but James Gunn has managed to bring out one of the funniest performances in recent memory from the big brute.

As entertaining as huge blockbusters can be, most of them lack heart.  Guardians of the Galaxy has heart in abundance.  The band of misfits we follow throughout their journey are characters we fall in love with and care about greatly.  It's a team of heroes with their own unique identities, untraditional and a little odd.  The Avengers they are not, and that's what makes them so endearing.  Throughout the movie we witness these petty criminal outsiders come together to form a heart warming friendship as they save the universe from the evil Ronan The Accusor, played by the amazing Lee Pace, whose facial expressions alone are worth the price of the DVD, or effort to illegally stream.  There's a lot of humor in this movie and it wears it on its sleeve, but there's also a few emotional moments that bring on the weepies.  The opening scene is actually quite heartbreaking.  It's nice to see an action packed sci-fi adventure in 2014 with well established characters, laughs aplenty humor and emotional depth.  I can't recommend this enough.  Pick it up now and share it with your current or future children.  This is one for the ages.

Posted by Fistfull of Boomstick at 08:05