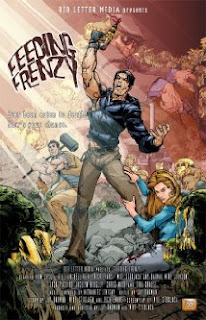 Boy was this movie ingeniously stupid.  By that I mean it's trying to be stupid, but it's actually quite hilarious.  I genuinely laughed out loud all through this.  Feeding Frenzy is an homage to the critter monster movies of the 80's, only much more deadpan in its humor.  This is one dry, intentionally awkward movie and that's why I instantly fell in love with it.  It's centered around the awkward main character Jesse, an awkward unlucky in love hardware store employee who suffers daily abuse from his crippled boss and constant rejection from the girl he's loved since high school.  On top of this his roommate is ill after suffering a heart attack just the week before.  Sounds like an everyday situation, but man is Jesse awkward... Anyway, Jesse has suspicion to believe that his boss is harboring a dark secret and sets out to uncover it.  What he finds in the hardware store basement only adds to his problems and it's up to the hopeless Jesse to stop the secret from eating the townsfolk.  Anyone who has read my blog for awhile will know that I love horror comedy, especially ones with slacker/awkward characters.  That's probably because I can relate to characters like this to an etent.  I haven't been watching a lot of movies the past couple of months and this made me look at myself in the mirror, slap my face with a wet fish and scream, ''WHAT THE FUCK IS WRONG WITH YOU?''

So why should you watch it?

You probably shouldn't.  It's not going to change your life for the better.  Your friends will probably think it's weird and your mom will hate it.  But hey, that's why you should watch it.  If you enjoy a senseless fun music experience then look no further.  Feeding Frenzy is a cheap homage/parody to the cheeky critter movies of yesteryear.  Imagine Troma decided to get a little more tasteful and hire some writers with darker, more mature comedic sensibilities, but you know, still obviously smoked a lot of pot and enjoyed crafting sexual innuendos about hookers with blood gushing from their head.  I think what gave me the Troma vibe was the cheap production and the absolutely loatheable villain.  The movie, as cheap as it is, is very well directed and has an atmosphere which compliments the deadpan nature of it.  The score is cheesy, menacing and Danny Elfman like which bobs along with the mischief.  As for gore and F/X, it's cheap but cheerful.

Overall, a fun B movie for those of you who love fun B movies with awkward characters.  This is made out of sheer love of direct to video cheesefests of the 80's, but it never descends into out of control schlock.  A movie like this could so easily descend into chaotic shlock and absurdity, but it manages to bridge the gap and stay somewhat classy... so to speak.  The comedy is genuinely hilarious and these guys, as little as I know about them, appear to have some genuine talent.  Who knows what they could go with a bigger budget?

It's good to be back
Posted by Fistfull of Boomstick at 11:20 3 comments: