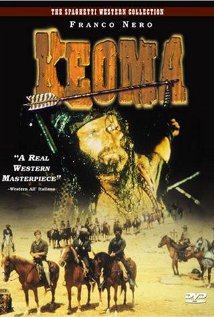 A fellow horror lover on IMDB made an interesting post saying that horror movies and spaghetti westerns go hand in hand.  I think it's a fair point and I agree with it to an extent.  There's lots of shared themes in both types of film.  Personally, I don't understand why there isn't more horror/western hybrids.  Think about the Old West as a setting for a horror film.  Why hasn't it been tapped into more.  In fact, why hasn't it be done so often that we're not sitting here right now thinking, ''Oh no!  Not another horror western.''  Anyway, I'll save this topic for my next post, because believe me, I have a LOT to say on it and I hope some high up movie person sees my little insignificant rant and does something to make it a reality.  Until then, I want to talk about Enzo G. Castellari's cult classic, Keoma, starring the original Django, Franco Nero.  This movie is so good that people still consider it a masterpiece in spite of its atrocious soundtrack (which didn't bother me much but I'll admit it wasn't exactly Morricone standards).  This is considered a classic among many fans of spaghetti westerns and after watching it, I understand why.

Nero stars as Keoma, a half-breed who returns to his hometown after serving in the Civil War to find it under the control of a vicious gang, which includes his 3 brothers.  They're pretty mean bastards as they force the sick townspeople into slave labour and treat women with the utmost disrespect to say the least.  It's up to Keoma to save the day and restore order to the town with the help of an old friend.

Apparently, the script was binned before shooting and they all just kinda made this up as they went along.  I can believe that to be the case as the dialogue isn't exactly going to win any awards.  Furthermore, there's no real cohesion to the plot.  It does however make up for those misdemeanours with raw emotion, bleak grittiness, impressive shots, beautiful landscapes, appropriate settings and some fine slow motion, action packed shootouts (the big shootout at the end is fantastic).

I recommend this movie strongly.  In a genre that has spawned countless movies (including a lot of trash), this really stands out.  Watch it now with all of the Django Unchained excitement in the air (Nero has a part in Tarantino's new 'Southern', I believe).
Posted by Fistfull of Boomstick at 03:06 No comments: 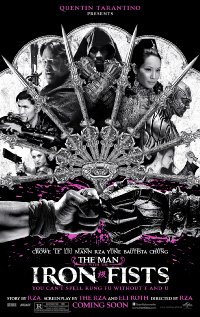 Hey guys.  It's been awhile I know, but I haven't really been watching a lot of horror or cult movies recently.  It's practically been wrestling on my TV screen for a couple of months now, but I'm back to my geeky film habits in time for Christmas and shall get back to my blogging ways.  I figured making my return with one of the most anticipated movies of my life would be appropriate.

I meant what I just said.  No one has looked forward to Man With The Iron Fists more than me.  I'm the world's biggest fan of hip hop, in particular Wu Tang Clan.  So when I heard RZA was directing his first kung fu feature, co-written with Eli Roth and produced by Tarantino, I really couldn't contain my excitement.  I expected a fun, over-the-top, violent movie that was full of pastiche style over substance and that's exactly what I got.  A lot of people are hating on this film and I can see why, but for me it did exactly what I wanted it to do.  To put it plain and simple - it's fun.


This film isn't for the uptight and you definitely need a sense of humor to enjoy it.  I mean, take Russell Crowe's character.  His name is Jack Knife, he refer's to his endowment as the ''baby's arm'' and he gets up to his guts in prostitutes.  Ex wrestler Dave Batista also plays a devastating golden cyborg.  See what I'm getting it?  Personally I loved these elements.  However, there is some real strengths in this movie, especially considering it's RZA's first time directing.  The action is frequent and bloody and although not on the level of the Shaw Brothers, it's still pretty damn good.  RZA as a writer has a great imagination and it's nice to see his ideas on the big screen.  It's completely historically and culturally inaccurate,  it hops along to a hip hop soundtrack and it's a little bit cheesy but I loved it and others who enjoy mindless popcorn flicks probably will get a kick out of it.
Posted by Fistfull of Boomstick at 02:37 2 comments: