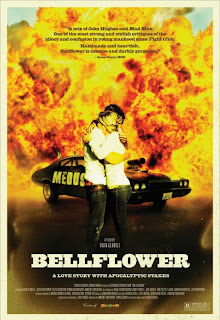 Bellflower directed, written by and starring Evan Glodell isn't for everyone.  It's slow, it's nihilistic, it's gritty and it's dark.  Personally, these are just a few of the reasons why I loved this as much.  So before I start I'll get the ''if you liked such and such then you'll like Bellflower'' comparisons out of the way first, because it really deserves to stand out in its own right but I know from personal experiences comparisons have lead me to checking out certain movies I've come to love.  So if you like Fight Club and Harsh Timesand gritty nihilistic movies then you'll probably enjoy this, also if you like 'hang out' movies like Clerks and Slacker then you might like this (although it's not a comedy), if you like independent films with that proper indie feel then definitely watch this. If you love Mad Max then you need to see it but ultimately, if you like movies that are just a little bit different, full of heart, passion and great film making and performances all round then you need to check this out immediately.

The movie focuses on a group of disillusioned characters.  They're young, like to party and totally slef destructive.  The 2 main characters have a fantasy where they will rule the new world after the Apocalypse, and cruise around in their muscle car with a flame thrower (sounds pretty awesome actually).  Anyway, guy meets girl, girl breaks guys heart and guy hits a downward after a break up with a girl he really thought he had something special with.

That's a basic plot summary, but you need to see the movie to fully appreciate it.  Obviously I can't spoil it for you.

This isn't a nice movie.  It's dark, gritty, nihilistic and every character is living on the outskirts of normal society.  However, the 2 best friends this movie is centered around are extremely likable, even though they are a little crazy and slacking off but trying to make their biggest fantasy a reality (preparing flamethrowers and a muscle car for the Apocalypse is their one positive motivation).  As twisted as they may be though, there is a sweet friendship between them that most people who have a best friend they've known all their life can relate to.  Also, most people have had their heartbroken at some point (fair enough they don't go as insane) but it happens to the best of us.  This makes the movie seem human and realistic and a counterpart to the ultimate, high concept delusional daydream they spend their lives preparing for.  There was also a really tender love story happening for awhile.

It's a low budget movie but in this case it really works to its advantage.  It's carried by amazing performances from every cast member and it's also visually stunning.  Evan Glodell just seems like a natural film maker.  The car is amazing (I read this was built for the movie by the director) and is totally worth all the time spent on it.  The soundtrack is also incredible, lo-fi awesomeness.  Basically, in summary, this is one of the best movies in years.  It's incredible and an instant independent classic that I know I'm going to love for the rest of my life.
Posted by Fistfull of Boomstick at 22:26

Email ThisBlogThis!Share to TwitterShare to FacebookShare to Pinterest
Labels: Cult