It is written in all legit History textbooks that a secret Nazi space program managed to evade capture and sneak off to the Moon, where they built a space fortress and have been making preparations to invade Earth ever since.  I mean, everyone knows that right? 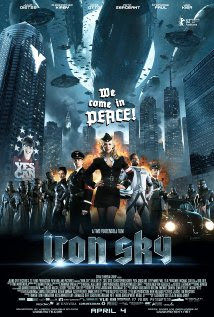 Leave your brain at the door here and just enjoy the film.  I've read reviews that are taking this way too seriously, saying it's anti-American and such.  Well, it kinda is but it's still harmless fun and enjoyable satire.  Personally, I'm of the belief that there's no harm ribbing on anyone as long as it doesn't start any wars.  I'm the world's biggest South Park fan, so a little satire isn't going to offend me.  Nazi's are a touchy subject.  The atrocities from World War 2 will never be forgotten, but this isn't pro-Nazi in any way, shape or form.  It pokes fun at Nazis as well.

Julia Dietze is my new favorite actress.  She's so damn hot and gives a superb performance as the sweet, naive Nazi who doesn't know the truth about Nazi history.  She believes in peace and love, unlike her dominant loverboy Claus Jensen, played by Gotz Otto, who steals the show as the future Fuhrer of the Fourth Reich.  He's a terrific villain.  Christopher Kirkby as James Washington, the male model kidnapped by Nazis on a visit to the moon is frigging hilarious.  Udo Kier also has some cameos in the movie, and where as he's always nice to see, his role isn't huge but it's effective.

This isn't a 'so bad it's good' affair either.  For a 7.5 million it looks visually stunning, and the viewer could be forgiven for thinking it cost a whole lot more.  Not bad considering it went straight to DVD (at least here in the UK anyway).  It looks good and it's full of heart.  A winning formula.

Iron Sky is cheesy, funny, campy and over the top awesomeness.  This film is going to be a cult classic and if the plan sequels get the green light, it's going to be one bad ass franchise.  This will surely become a cult classic over time.  I love you Julia Dietze.
Posted by Fistfull of Boomstick at 05:44