During my Charlie Sheen marathon I came across a gem of an 80's horror/sci-fi/romance/comedy.  This movie really kicks ass.  I expected a fun movie but after watching this, I gotta say, HOLY MOSES!!! This is an underrated 80's masterpiece. 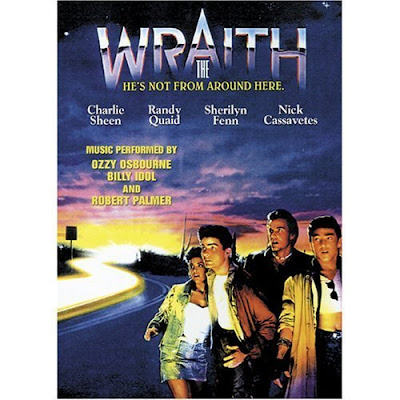 Charlie Sheen plays Jake, the reincarnation of Jamie, who was murdered by a group of misfits.  The group of misfits have a habit of stealing cars from nice people if they beat them in car races, but when a mysterious car shows up and keeps offing them one by one, they've met their match.

This movie has a lot going for it - it's funny, action packed, has car racing and chasing, hot chicks, an awesome soundtrack and a convincing group of characters.  The performances were cheesy and goofy, but the good guys were very likable and all of the bad guys were easy to hate. You really root for the car murdering the bad guys in this one.  It's not often seen in horror films, but this has a sweet tenderness to it.  It's essentially a love story at heart and when you know the killers motives, you want him to succeed.  If you want scares and horror don't watch this, but if you want a sweet romantic love story with high speed motor vehicles, explosions, a kick ass soundtrack and enough 80's cheese to feed a third world country then this is for you.

This is better than you might expect.  I knew it'd be fun, but I didn't expect it'd be as awesome as it was.  I am in awe.
Posted by Fistfull of Boomstick at 19:28