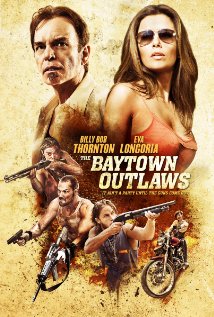 Ever since the classic Grindhouse collaboration between Tarantino and Rodriguez in 2007, we've seen a number of grindhouse style movies follow.  Most of them have their tongues placed firmly in their cheek in loving homage to exploitation films of yesteryear, but I think they're all a breath of fresh air and a nice little new wave of grindhouse cinema is happening before our eyes.  There's been a few little gems since 2007 and Baytown Outlaws is the latest.  It wears it's Tarantino on its sleeve (perhaps unintentional but the director admits True Romance was one of his main inspirations when writing this) and proudly so.  Barry Battles has went out with the intention of making a ''Southern whip-ass extravaganza'' and he's duly delivered.  It's lighthearted black comedy (if that makes sense) at its finest, full of laughs, action and blood.  There's hot chicks on motorcycles, Eva Longoria in daisy dukes and Billy Bob Thornton being a sleaze.  What's not to love right there?  What makes this movie though is our ''heroes'' the Oodie brothers, 3 redneck guns for hire.

The 3 brothers are hired by Eva Longoria's character to get her godson back from her gangster ex-husband, played by Bill Bob. It also so happens that her godson is in a wheelchair.  After failing to kill Thornton's character, he sends out assassins to track down the brothers and kill them.  It's a simple story; the great American action road movie through the South with killers in pursuit, including the insatiable Zoe Bell and her murdering biker gang of prostitutes.  Throw in some Clutch and Skynyrd, guns and army vehicles and you have quite the romp.

There's already a shootout by the time the opening credits get rolling and it sets the tone for what's to follow.  This is action packed to the max and it doesn't disappoint.  The banter between the brothers is hilarious and really endears them to the audience and gets us rooting for them.  It almost makes you forget that they too are ruthless killers.  Their relationship with the kid they need to recover gives the movie some sweet charm, but overall, it's just a free for all with no morally redeeming characters whatsoever.  This is a fun 90 minutes indeed if you like these kind of films.  I love them.  Think Smokey and the Bandit meets True Romance.  Or as another reviewer suggested, Tarnatino directing Dukes of Hazzard.
Posted by Fistfull of Boomstick at 07:33