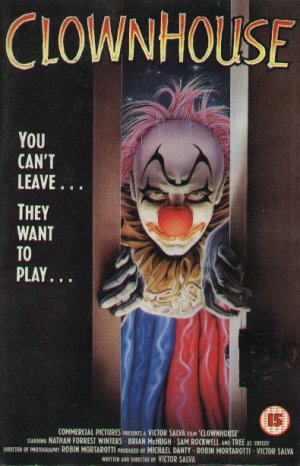 I'm of the opinion that a movie should only be judged by the product that's visible on the screen, but I know some people may judge a movie because of the circumstances surrounding it.  Clownhouse directed by Victor Salva (Jeepers Creepers) to some, is a victim of the latter.  For those of you not in the know, Victor Salva was found guilty of performing sexual acts with one of the child stars of the film.  It's a shame that this had to happen because people are going to avoid watching the film as a result, and if you ask me they're missing out because, when judged solely as a piece of cinema,  it's one of the best horror films of the 80's.

The film revolves around 3 young boys, one of whom, Casey, is petrified of clowns.  One night they visit the circus and poor Casey is so tormented by a playful clown and his friends that he runs out screaming.  Afterwards the 3 boys head home thinking all is well, but they're home alone and the clowns from the circus have been murdered by escaped mental patients and their costumes have been acquired by the killers who then set out to have some fun.  It's only fitting they should find the house where the 3 kids are telling ghost stories unsupervised.... Didn't you just hate when that happened as a kid?... Anyhoo, Casey keeps seeing the clowns outside the house, and he encounters them on a couple of occasions.  However, no one believes him at first, and it doesn't help that his older brother not only doesn't believe him - he also teases him.  The clowns only torment Casey at the start, which is fitting due to his bed wetting fear of clowns.

I won't give away any more of what happens in the movie because it's one you really need to see for yourself.  I will tell you more reasons why it's a good film though.  The basic idea of this movie is horror at its purest - children home alone being invaded by psychopaths, who's only motivation is to torment for the sake of it.  In my opinion, it's the best of the home invasion movies, and it's even more effective because its children who are the victims.  It's a suspenseful horror film, and what it lacks in blood and gore it makes up for in slow building tension, a menacing atmosphere throughout and an ominous score combined with circus music.  It has an incredible 80's feel to it but it still holds up to this day.

I plead that you put any personal animosities towards the directors actions and focus solely on the piece of cinema he's created.  He may be a pervert, but he's also a very talented filmmaker and if you can watch this and judge it solely as a movie then you're in for a real treat.  Clowns are a staple in horror history, and this is an example of them being executed to the best of their ability.
Posted by Fistfull of Boomstick at 02:25